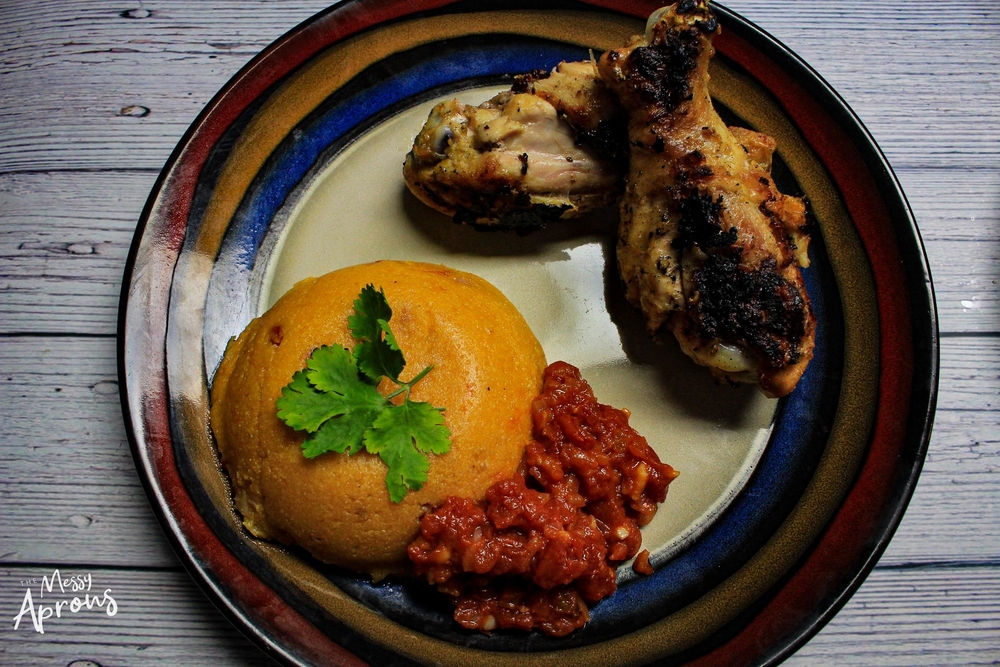 Bringing us to up to 57 countries is a lesser known African country, Togo. Togo is a West African country bordered by Benin, Ghana, and Burkina Faso along the Gulf of Guinea. This country has a long growing season which fuels their agriculture dominant economy. Cocoa, coffee, and peanuts are some of the important crops grown here. Togo is famous for its white sandy beaches and national parks.

Staple foods found in Togolese cuisine include beans, yams, plantains, millet, rice, and maize. The country has a history of rule from Germany and France which does influence their cuisine. Due to this influence it is not uncommon to see Togolese people enjoying German beer and French baguettes. Today’s dish was made up of two components- grilled chicken and tomato corn meal cakes. Cornmeal as you probably know by now is a popular African staple that can be transformed into several sides to accompany the main meal. Chicken is more excessable in Togo and is commonly cooked over a fire similar to grilling.

I chose to marinate chicken drumsticks for 24 hours prior to grilling to get as much flavor as possible (recipe here). Ian being the grill master that he is I had him take charge with the cooking. As for the cornmeal cakes the directions were similar and easy to follow (recipe here). The tomato sauce was a great way to bring the cornmeal to the next level.

The chicken obviously tasted great from being grilled, but I was sad I couldn’t taste the ginger. Like I stated above the cornmeal with the tomato sauce definitely made it tastier than the past cornmeal dishes I have made. Still we were not wowed by the meal and I honestly don’t see myself making the cornmeal sides again (sorry..). We rated it 6.25/10. If the chicken had more ginger flavor it could have been rated higher.