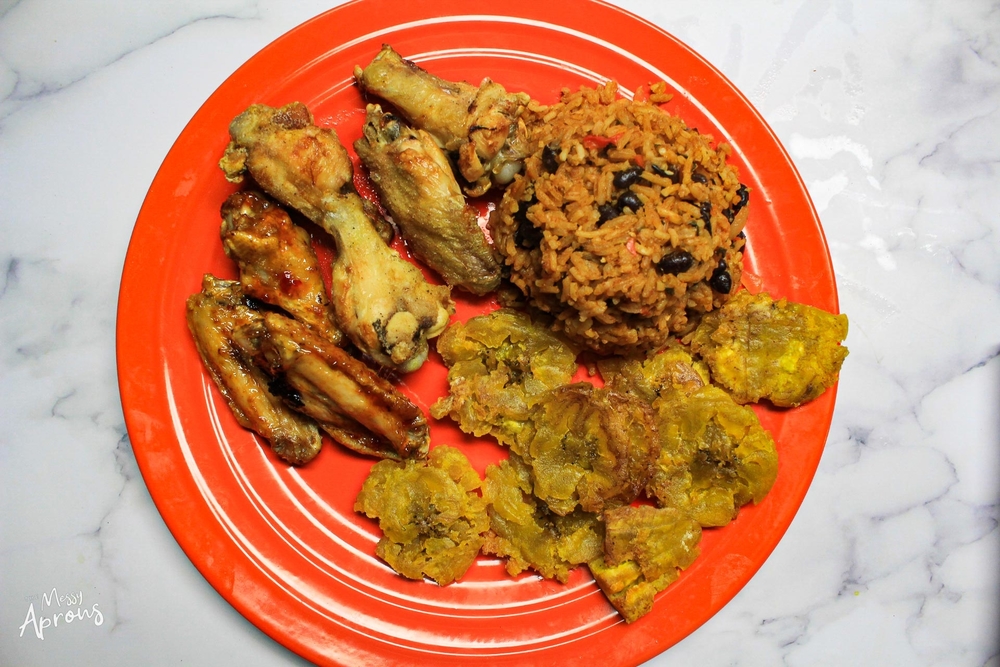 Hey guys we have made it to 80 COUNTRIES! Isn’t that wild?! For our 80th we are in the lovely Puerto Rico, a country my good friend is from! Puerto Rico is a U.S. territory situated next to the Dominican Republic and the Virgin Islands in the Caribbean Sea. It is one of the most densely populated islands with a whopping 3.5 million citizens. The name translates to “rich port” and was named Puerto Rico because of the gold that could be found in the fresh water sources on the island. It is considered one of the oldest colonies of the world because it was “discovered” by Christopher Columbus in 1493. Today you can explore their numerous beaches and caves along with immersing yourself in the Spanish-Caribbean culture.

Puerto Rico has African, European (mostly Spanish), and Taínos (natives) influence that makes up their wonderfully unique cuisine. The native Taínos influence brings yucca/cassava, avocado, coriander, annatto, pineapples, peanuts, and various hot peppers to the table. The European flare comes from wheat, cumin, onions, garlic, cilantro, dairy, and various meats such as chicken, beef, and lamb. You can find connection to Africa with the use of coconuts, yams, coffee, and various banana fruits such as the plantain! Today I will be making an original recipe of my friend Zory who is from Puerto Rico. Fried rice and beans is a classic Puerto Rican dish that combines several savory Spanish ingredients and is cooked twice in or to achieve the dry and “fried” consistency. She also educated me on plantains and how they pair well with this meal- she wasn’t kidding! They are now one of my favorite salty treats and taste better than fries (in my opinion). The recipe will be available at the bottom of the post.

This meal does take some time, however if you prep as you go it all works out. We decided to air fry some adobo wings which seemed like an appropriate pairing to us. If you have never fried green plantains before make sure to have plenty of veggie oil to fry them with and keep an eye on them so they don’t over cook. The perfect plantain is a nice golden brown. Be warned the rice/beans and plantain combo is VERY filling!

Obviously we adore this dish and think highly of it. I have made it several times and think of it as one of my favorites. The plantains had a nice crunch and reminded me of fried potato. The rice was well seasoned and tasted great with the addition of black beans. Together it is a killer duo. We love love LOVE this dish and rated it 10/10.

Our next adventure awaits in Italy where we will spend one week trying traditional foods simple and complicated. See you next time!