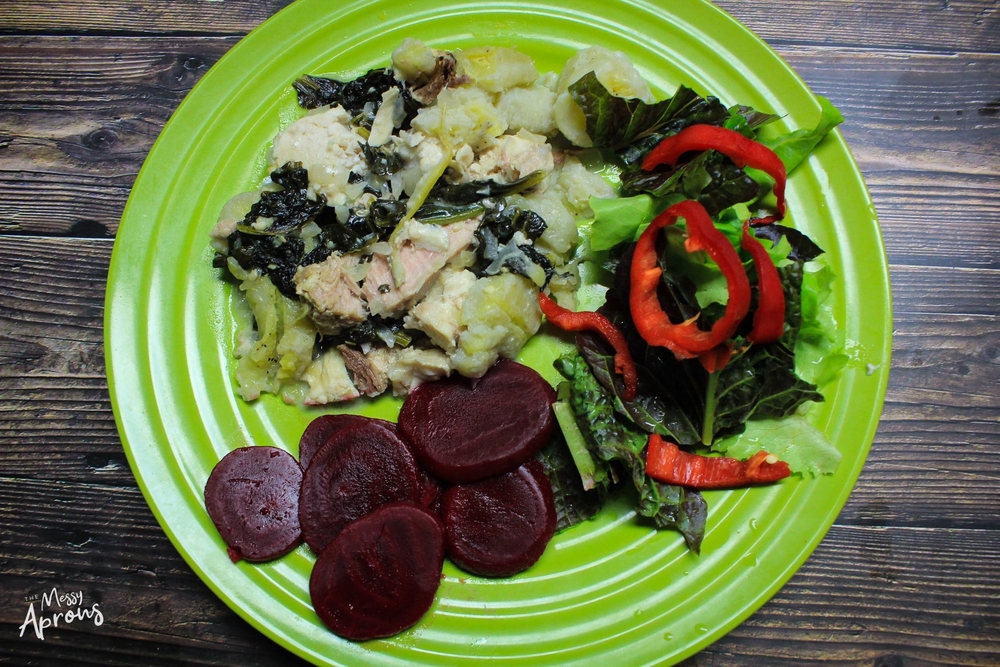 Hello fellow foodies, today we are at the Cooks Islands, a group of 15 islands in the South Pacific. You can find these scattered islands below Tahiti and close to New Zealand. Rarotonga is the capital island and most populated with approximately 13k inhabitants. This country was named after the exploring Captain James Hook, however he never visited the islands. Known for its tropical beauty the islands are not overdone with fancy resorts and flashy lights- actually no stop lights either! You can explore the limestone caves, pristine sandy beaches and underwater scuba excursions. The Cooks Islands is a top producer of the black pearl- a very scientific and precise process of inseminating oysters with sphere like shells. Over time the oyster will avoid the foreign object ultimately coating shell to make a black pearl over a few years time.

The Cooks Islands pride themselves of clean waters and immaculate seafood which their cuisine is filled with. Coconut and other native fruits are commonly eaten as well. All other foods are imported from their neighbor New Zealand. Today to honor the Cooks Islands I made Moana-Roa Mahi Mahi with a side of beats and salad (my easy way out of not making a potato salad). This traditional island fare includes taro leaves, green bananas, coconut cream, ginger, taro root, and more to accompany the fish. If you want to experience the real deal try this dish.

Once again there was no mahi mahi at my local store so I used tuna steaks instead! I also could not get taro roots or leaves so I substituted potatoes and spinach. This was definitely a new for us since we can never prepared or eaten bananas in a savory fashion before. I think this was easy enough to make just difficult to get my hands on all the right ingredients!

We thought the Cooks Islands brought unique flavors to the table. The bananas and fish may sound super strange, but the combination was actually pretty good. The cooked bananas didn’t lose their flavor and tasted like the uncooked fruit. It was surprisingly pleasant, but didn’t blow us away. We rated it 6.5/10.

Before traveling to ITALY we will be making a pit stop in Puerto Rico! Stay tuned!! 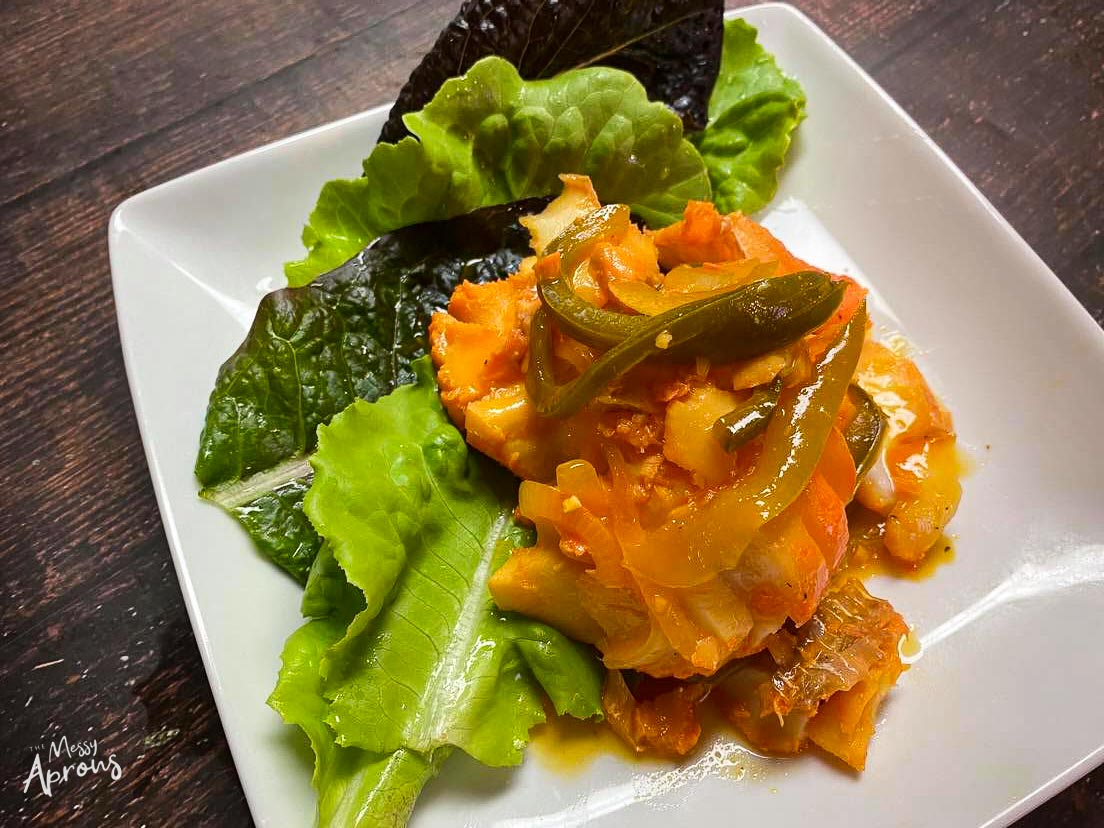 We are still in the tropics and visiting Saint Barthélemy (also known as St. Barts). This itty-bitty island sits below Anguilla, East to the U.S. Virgin Islands, and above St. Nitts and Nevis. The island is primarily French-speaking and is part of a collectivity of France (first-order division of France) that also contains Martinique, Saint Martin, and Guadeloupe. At just under 10 sq miles in size it has an impressive array of high class restaurants and luxurious resorts. The island has no fresh water sources so the locals rely on desalination plants to collect rain for drinking water- talk about stressful!

Saint Barthélemy cooking incorporates French, Creole, West Indian, and Asian influence with many fine dinning restaurants around the island. Indian cooking styles often include fish and steamed vegetables, Creole include more spice. More often you will see French and Creole styles of food. Like other Caribbean islands they use native produce and seafood in their meals, much like today’s dish. Red snapper can be found in the Caribbean waters and is the main attraction of this West Indian dish. You can find the details here.

This was a pretty straight forward dish using common ingredients, most already being present in the apartment. Never skip marinating since this is how the fish will absorb all the flavor. We decided to pan fry the fish (especially since it was cod fillets vs red snapper).

We felt this dish was well seasoned, however it was more on the simple side. I was also unable to get red snapper again because it is rarely ordered at the rural Hannaford I go to. We can’t lie and give this dish a rating higher than 6.5/10 because it does not compare to other fish dishes we have made. It is still good and easy to make but not a knock out recipe.

Next we go to Liberia! See you there 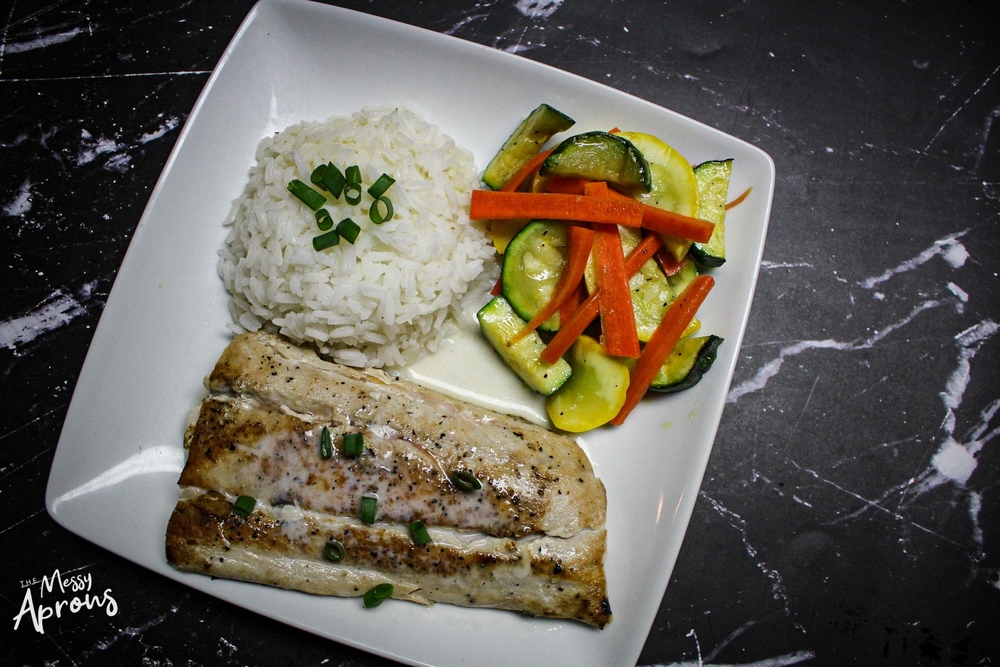 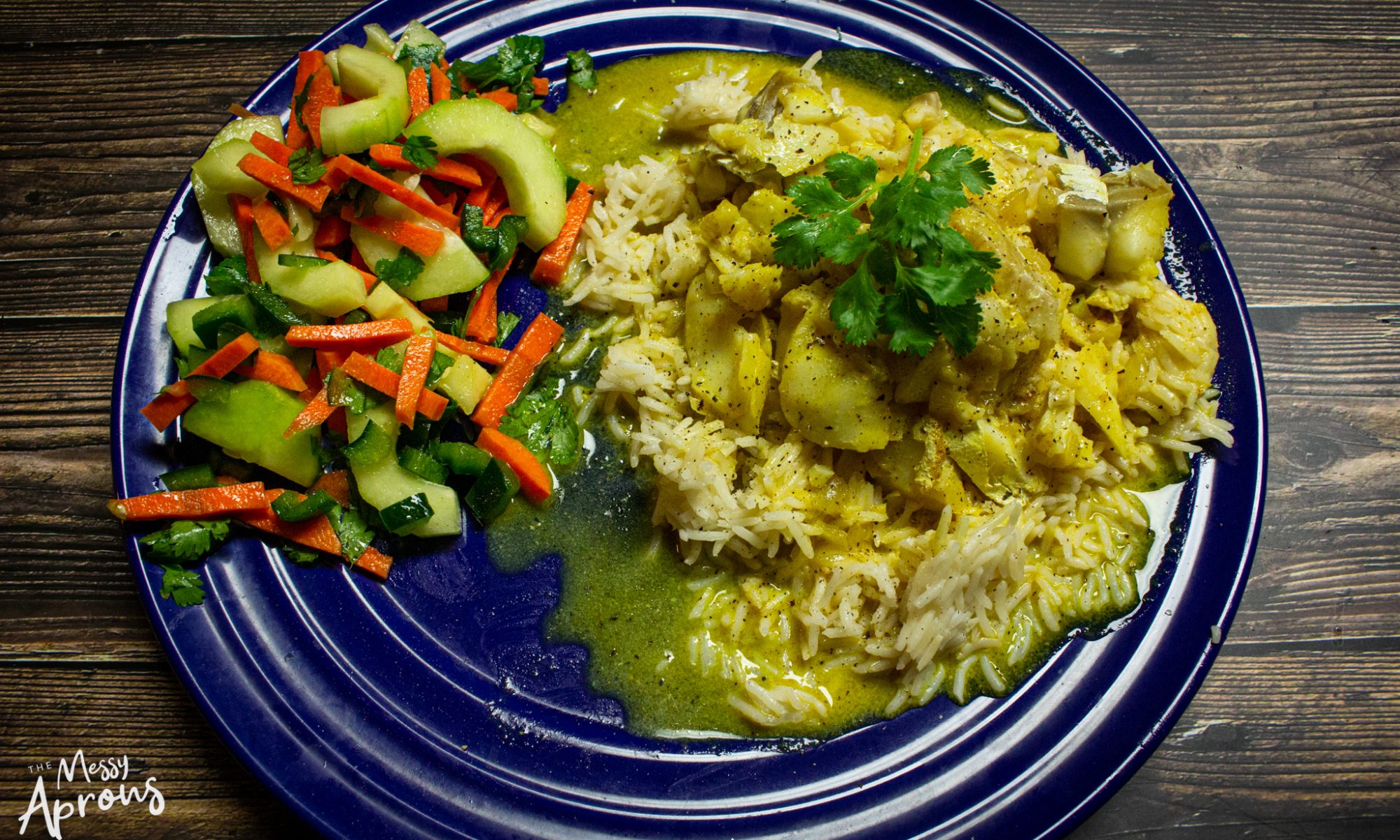 WE MADE IT TO 50 COUNTRIES GUYS!! WOOHOO! Nearly 5 months after starting the blog we have reached this milestone. I’m thankful to my followers on all platforms and everyone’s recipes and information I have been able to share. I can’t wait to see what the next 50 bring!

At #50 is Tanzania, a East African country that is bordered by Kenya, Uganda, Mozambique, Malawi, Zambia, Rwanda, Democratic Republic of the Congo, and Burundi. Wow that’s a lot of countries! This country is known for the famous Mount Kilimanjaro which stands at 19,341 ft tall making it the tallest mountain of Africa. Nearly every climate system can be found around this magnificent mountain which includes alpine desert, arctic, rain forest, heath, moorland, and cultivated land.

Currently Tanzania is home to 120 ethnic groups which have Asian and European roots. Beans, coconut, and plantains are the three primary staples in their traditional dishes. These ethnic groups influence the food found here including tonights dish.. curried fish. Tonight’s meal consisted of a curried fish stew-like concoction and a side, simple yet delicious side salad.

Both recipes were easy to prepare and paired well together. I used cod as my white fish, but I would have tried catfish if given the chance. It was refreshing to make a meal that consisted of less expensive items, many of which are staples in my home.

We loved how cilantro lightened the buttery curry and the salad was refreshing. This is definitely an easy and healthy weeknight meal. We rated it 7.25/10. 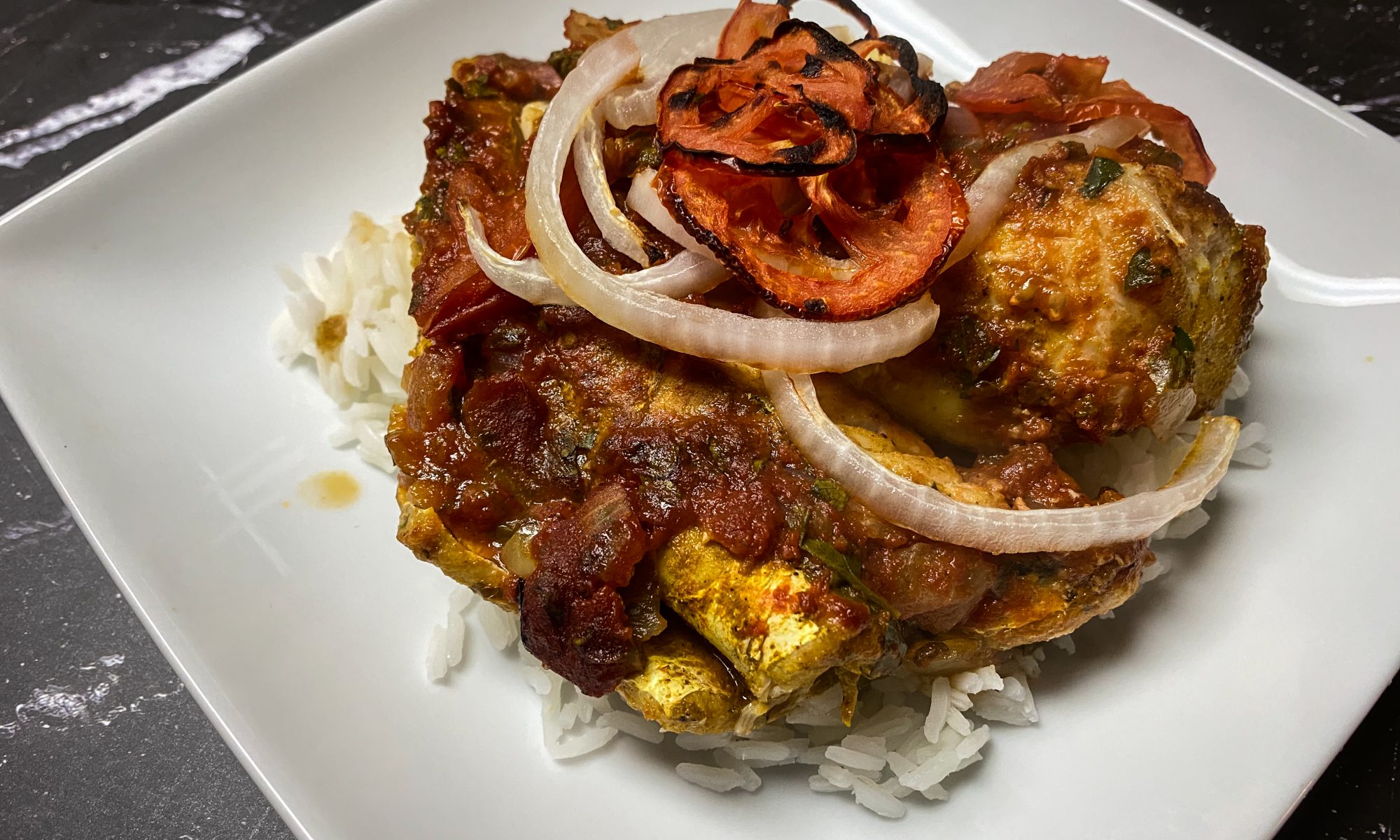 Growing up in the United States, discussions of Iraq were often about war and conflict. Despite the media’s portrayal, we know this country is full of amazing, kind people and has a very rich history.

Iraq has two major rivers – the Tigris and the Euphrates. Seated between these rivers is part of the region known as Mesopotamia. Mesopotamia is considered by many as the birthplace of modern civilization and is home to the world’s earliest known forms of writing, mathematics, and the wheel.

Masgouf is Iraq’s national dish. This dish typically involves a large carp fish covered in curry and a well-spiced tomato-based sauce which is traditionally cooked over an open fire. The recipe we used is here. In this recipe, she also recommends baking and finishing with the broil setting which is what I did.

Rub the fish with curry and salt and then begin to prepare the sauce.

Prepare your ingredients and begin by sautéing onion and garlic briefly first.

Add the chopped tomato, parsley, tomato paste, vinegar, lemon juice, water, salt, curry, and cayenne pepper mixing well. Occasionally stir the sauce while it simmers for 5 minutes. Since I didn’t prepare this over an open fire, I added some liquid smoke to bring some of that element into the dish.

Cover the fish with your sauce and top that with slices of tomato and onion. Bake this in the oven for about 30 minutes at 375-degrees. Turn the oven to broil for the last 3-5 minutes to add a char to the dish.

Finally, serve with your favorite rice! The sauce for this dish was delicious and the addition of liquid smoke helped give this dish the authentic flavor. We felt however the dish was missing something.. Final score: 7.5/10. This sauce would pair well with any meat! 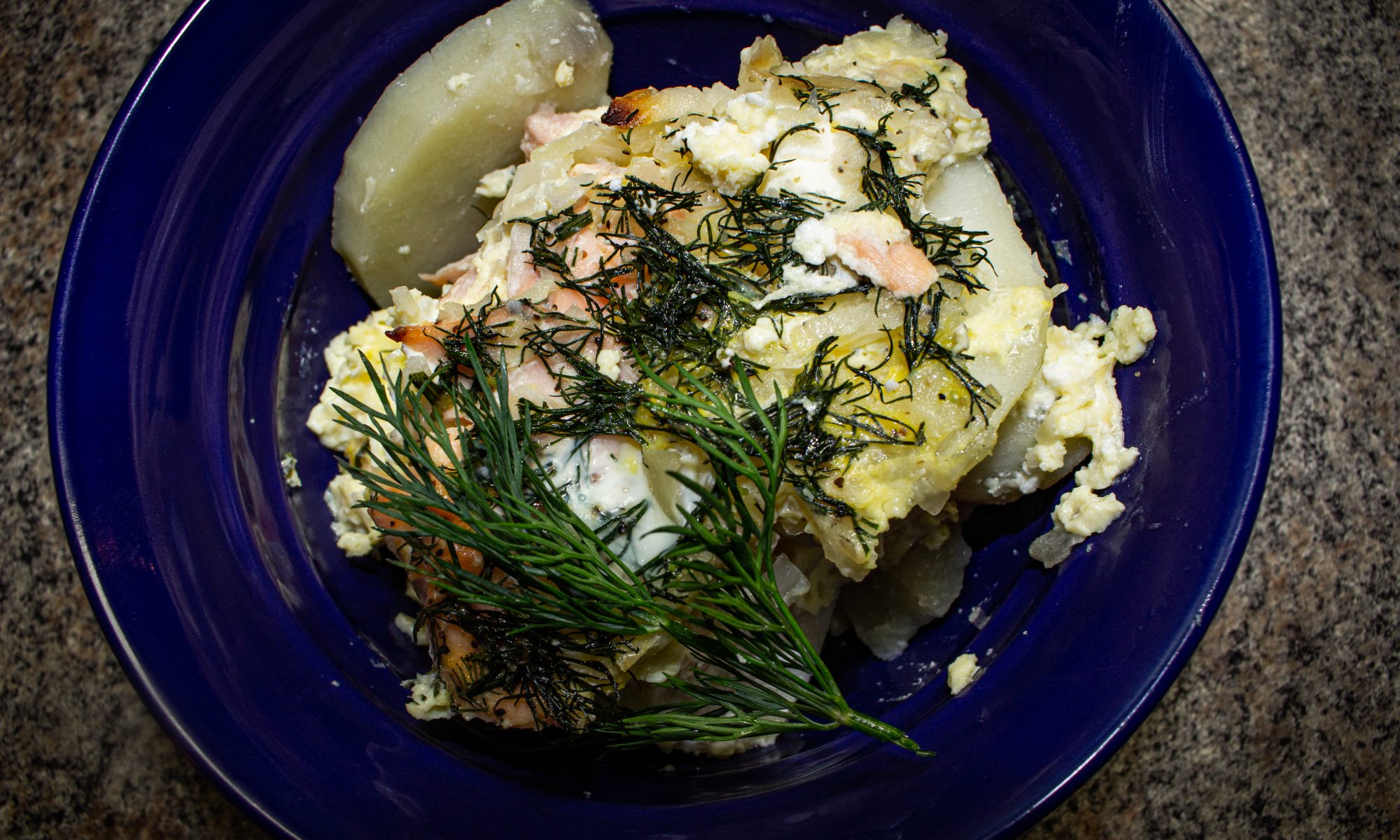